Use a vault for secrets

Need to provide secrets such as credentials to your robot? You can use a vault. Both local and Control Room vault is supported.

To better show you how to set up the vault, we have provided an example robot for you to play with.

Get the code and run this example in your favorite editor on our Portal!

The safest way to store secrets is to set up the vault in Control Room. You can use the Control Room vault when running your robots locally using VS Code with Robocorp extensions! 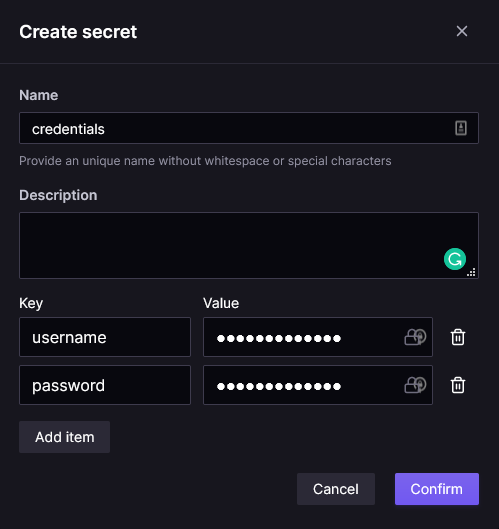 Configure your vault in Control Room in the relevant workspace using the UI. The name of the secret should match the name used in your code that reads the secret, for example, credentials. Provide the secrets as key-value pairs.

If you don't want to use the Control Room vault for any reason, you can set up a local vault file.

Create a vault.json file outside your repository, for example, in your home directory (/Users/<your-username>/vault.json).

Provide your vault values in the vault.json file, for example:

By doing so, you have created a secret called credentials.

You can use any name for the vault file and the keys in the file.

When running in Control Room, your robot will automatically use the Control Room vault without the need for any configuration.

When running your robot locally and using a local vault file, you need to tell the library that it should read the secrets from a local file. You do this by setting the relevant environment variables in the devdata/env.json file, which is included in the example.

Note: rpaframework version 14.1.1 or newer recommended! There were some naming changes to vault functionality starting from version 11.

Edit the file setting the RPA_SECRET_FILE variable so that it points to the vault.json file you created in the previous step:

This way, with no additional code changes, your robot will work both locally and in Control Room.

NOTE FOR RCC USERS: Robocorp VS Code extensions will automatically pick up the devdata/env.json file. While using RCC locally, you have to explicitly point to the file using the -e argument like so: rcc run -e devdata/env.json.

We added the RPA.Robocorp.Vault library in the *** Settings *** section:

We use the Get Secret keyword from the RPA.Robocorp.Vault library to fetch a secret by name credentials and store the secret to a variable. We can then access the properties of the secret by their name:

In the file variables/variables.py, we import the RPA Framework vault library and read the values from the vault:

After this, ${USER_NAME} and ${PASSWORD} variables can be accessed in the robot script, as we see here:

Your secrets are safely encrypted in Control Room. See the technical architecture and security article for more information regarding Control Room security.

For larger teams and enterprises, how you decide to use and govern the Control Room vault is an important consideration because granting the administrator or developer workspace role allows a user to see all secrets stored within the workspace's vault. Generally, most enterprise compliance programs frown upon sharing passwords between team members, because it reduces transaction accountability. In addition, any robot runs with access to the Control Room vault, so there is risk that a bad actor could develop a bot to extract secrets from the vault.

Controlling these risks requires implementing a few key controls, such as the following: